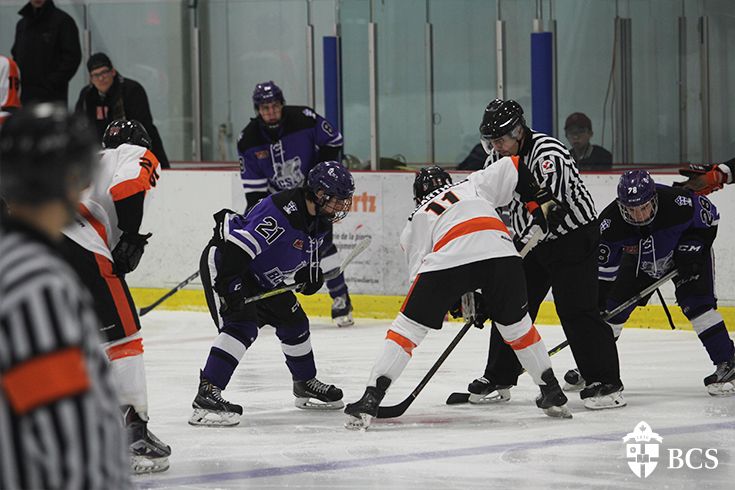 At home in the big leagues

Dec. 5, 2016 | Our U18/Varsity Hockey team served notice to fellow teams in the MPHL Bowers Division at Stanstead this past weekend.
New members to the prestigious Midwest Prep Hockey League this season, the BCS Bears posted an impressive 3-1-1 record at the league kick-off event in Burlington last month. In that crossover weekend, they played the five teams that make up the Malloy Division. This past weekend was the first time they faced off against their own division, competing against the four other teams that include familiar foes Ridley College and Stanstead College. Our boys came out strong, securing a 4-3 victory early Friday morning against St. Michael's College, and blanking Rice Memorial 7-0 that same night. Saturday evening's game against the Ridley Tigers was an exciting display of both attacking and clutch penalty-killing, as the Bears pulled off an inspiring 5-2 win. They headed into Sunday's match-up against Stanstead with the division's only perfect 3-0 standing. Although they clamoured back from a 4-1 deficit after the second period, they couldn't quite find that equalizer and lost 4-3. However, their dominant play now has them sitting in second place in the Bowers division and third overall in the league.

Don't miss both the U18/Varsity and the U16/Prep teams playing at home, as BCS hosts its 2nd Annual Ice Hockey Showcase from December 15 - 18.