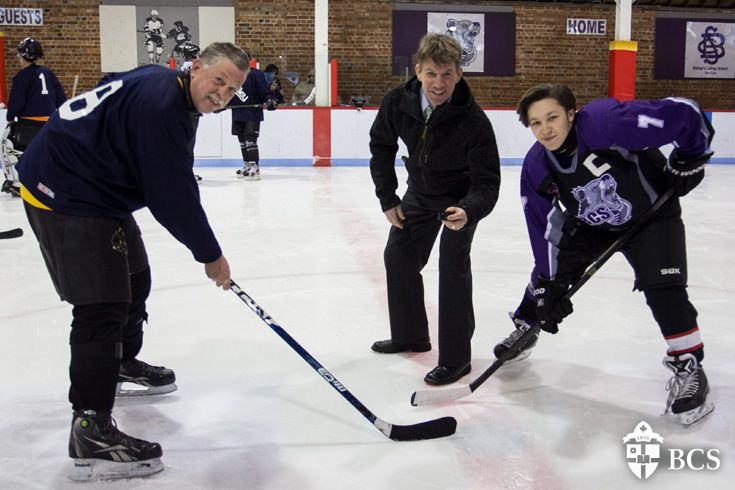 Feb. 20, 2017 | After four months of skills work, this year’s Intramural Hockey Association (IHA) made BCS history when the team played the first-ever IHA game this afternoon.
With three competitive hockey teams at the school, the IHA gives students who may never have even skated the opportunity to learn how to play the sport. The group has spent the last few months focusing on fundamental skills such as positioning, passing, skating, and stopping, and holding inter-squad games. However, coaches Mr. Andrews, Mr. St-Amant, and Mr. Morimoto felt it was time for them to experience real hockey game conditions. The “Old-Timers” of Lennoxville – all aged over 60 – were kind enough to step onto the ice and give these rookies their first taste of true Canadian hockey competition. The Old-Timers got off to a good start, leading the Bears 3-1 but the IHA team came back to tie it up 3-3 - which was the final score, even after a period of overtime! Congratulations to all and specifically to Alex Arsenault, who was named MVP for his awesome goaltending!
Back
80 chemin Moulton Hill, Sherbrooke, QC J1M 1Z8 CANADA
Phone: 1.819.566.0227 | Toll-free: 1.877.570.7542  | Email Us