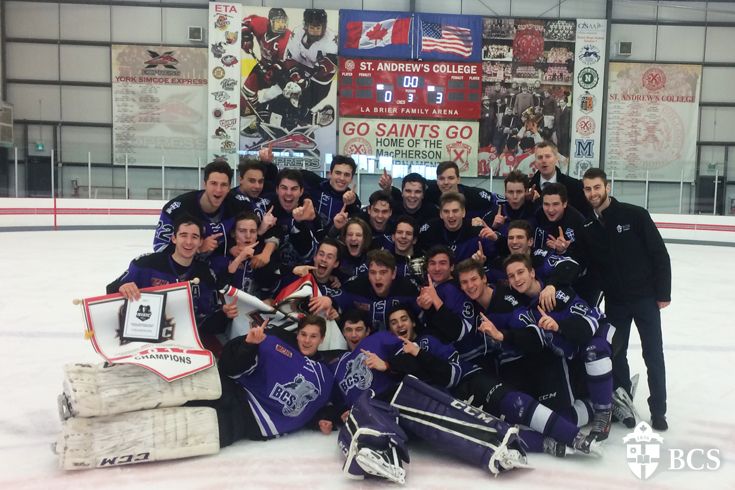 Mar. 13, 2017 | The U18/Varsity Bears played their hearts out this weekend to capture the NISIC Championship!
After entering the tournament ranked fifth, they suffered a disappointing loss in their first game to Rothesay-Netherwood School, 3-0. They quickly rebounded, however, to beat Ulysse Prep 3-1 later that night. Heading into the knock-out round on Friday, they took on always-worthy adversary Ridley College in the quarter-finals. Always a close, well-matched game, the Bears dominated to win 3-1 and qualify for the semifinals against top-ranked St. Andrew's College (SAC). Saturday night's game against SAC was a nerve-wracker that saw BCS take an early 2-0 lead in the first period, only to have SAC tie it up early in the second. The third period yielded no scoring and the game went into overtime. In one of the most exciting goals of the year (at least from a Bears' perspective), forward Alec T. scored after just over a minute, sending the team to the finals for the first time ever. Sunday's game against second-seeded Upper Canada College was a demonstration of skill, determination, and sheer heart, as BCS put away three goals and battled some heavy six on four penalty kills to run out the clock and win the championship, 3-0. Goalie Vincent D. lived up to his Number 31 jersey with incredible performances each game and was deservedly named James McCreath Tournament MVP.