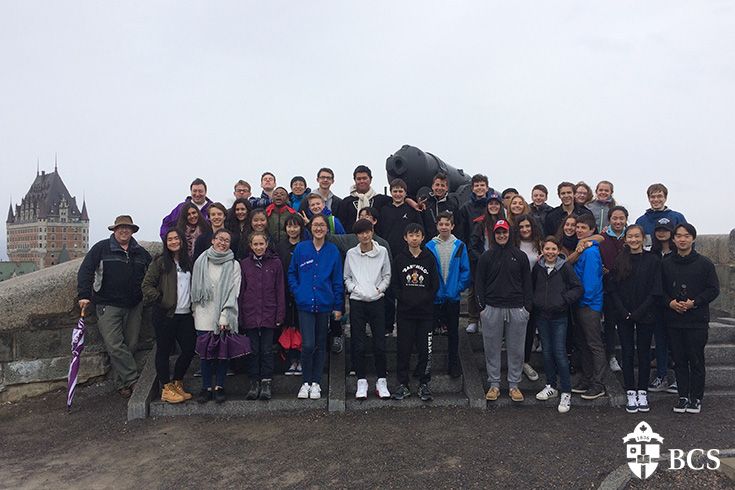 May 8, 2017 | Our Form IV students spent last Friday on a tour of Quebec City.
The educational tour started with a walk on the Plains of Abraham and a discussion about the battle fought between the British and the French. A guided tour of the citadel followed, and students learned about the history of the Fort, as well as that of the Canadian 22nd Regiment. Afterwards, the group walked down to the Musée du Fort, which is located next to the Château Frontenac, and enjoyed a visual representation describing the battle. After all of this, students were able to walk around old Quebec, exloring the upper and lower cities on their own. Students and staff convened for dinner at the restaurant Aux Anciens Canadiens where they dined on traditional French Canadian dishes, including such items as wild game meat pie and tourtière. Despite the cool weather and rain, the group very much enjoyed the day, with the Social Sciences department declaring the trip a success!
A special thank you to Mr. White for the very thorough report!
Back
80 chemin Moulton Hill, Sherbrooke, QC J1M 1Z8 CANADA
Phone: 1.819.566.0227 | Toll-free: 1.877.570.7542  | Email Us