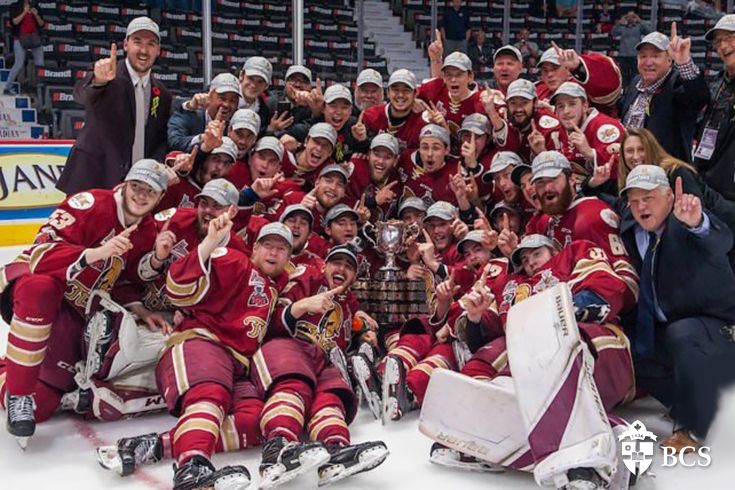 From Memorial Arena to the Memorial Cup

May 28, 2018 | Two former BCS Bears have claimed the CHL’s 100th Memorial Cup with the Acadia-Bathurst Titan!
Noah Dobson, BCS’18, and Zachery Bennett, BCS’18, helped secure this year’s CHL Memorial Cup for the Acadie-Bathurst Titan—the first cup win in franchise history. The CHL (Canadian Hockey League) is an umbrella of the three major Canada-based junior hockey leagues: the Ontario Hockey League, the Quebec Major Junior Hockey League and the Western Hockey League. The victory also marks the first time since 2013 that a QMJHL (Quebec Major Junior Hockey League) team has won.
While both defencemen are Bears alumni, this is the first time the two have played together. Dobson laced up his skates in Memorial Arena during the 2014-15 season, while Bennett was here for the 2015-16 and 2016-17 seasons and a member of our NISIC National Championship-winning U18/Varsity team last year.
Jeff Bray, BCS Director of Athletics, congratulated Noah and Zachery on their win, applauding them for their impressive accomplishment. He noted “the entire BCS community is very proud of them. Heartfelt congratulations to them both, along with their teammates, on the President’s and Memorial Cup wins, and best wishes for continued success in their hockey future.”
BCS has had several members of the hockey program drafted by the QMJHL over the years, including current U18/Varsity players No.8-Lightfoot, No.77-Matte, No.88-Bossé, and No.91-Lacombe. Find out more about our hockey program here.