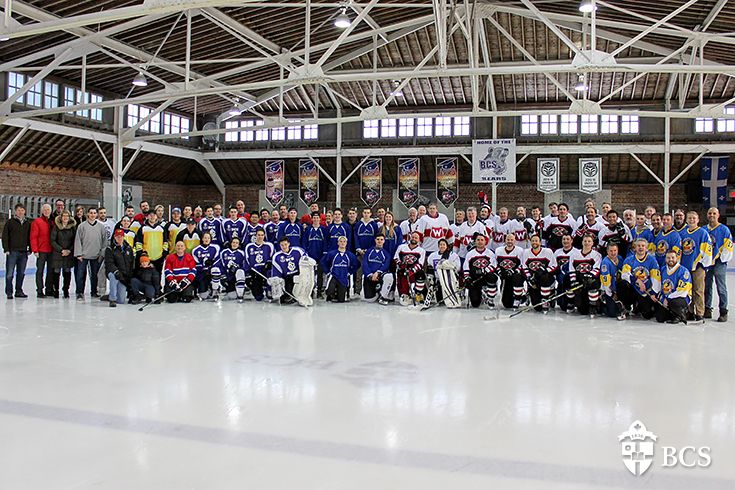 The ice is right

Feb. 25, 2019 | This weekend we held our 33rd BCS Alumni & Friends Hockey Tournament!
The two-day event had 68 players competing in Memorial Arena along with many more alumni, past parents, and community members cheering from the stands. All nine teams faced off on Saturday, each playing three games, along with a special 40-minute game that pitted BCS Staff against the founders of the tournament, the ABS. Made up of alumni from the 1960s and '70s and joined this year by former BCS staff member, NHL player, and Olympian, Patrick Lebeau, the ABS have been dedicated supporters of the hockey program at BCS for decades.

On Saturday evening, we welcomed 85 community members in Ross Hall for a méchoui banquet hosted by past parents, Guy Patry and Michel Dubois. The evening was a resounding success, with many past players and parents reconnecting over delicious food, with all proceeds from the event supporting our hockey program.

The tournament continued into Sunday afternoon with the semi-finals and finals. After many hard-fought games, Gen-X reigned as champions in the senior "Masters" division, claiming the trophy from the Mushmen who have won for the past few years. In the younger "Open" division, the Beauties claimed the trophy for the fifth year running, though they're beginning to face some serious competition from the newcomer team Waite.