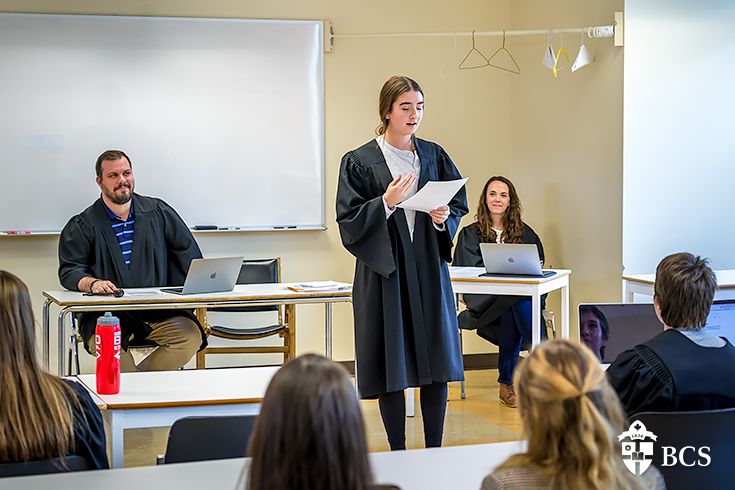 Mar. 7, 2019 | A mock trial took place in the conference room today and tensions were high!
The Form VII Law class transformed our conference room into a court room this morning. Each student was given a character for the trial along with key information that pertained to their role in the case. Ms. Rommens played the role of judicial clerk while Mr. St-Amant acted as the judge. True to form, those in attendance were asked to stand as the judge entered the courtroom. "I love this part," exclaimed Mr. St-Amant.

The case centred around a loud fictitious party at which Joe (played by Antoine) is said to have pointed a firearm at his neighbour (Shelby) after she interrupted the party to complain about the noise. The trial involved two offences: possession of an unlicensed firearm and pointing a firearm at another person. As the prosecution and the defendant laid out their arguments for a jury of students and staff, tensions rose with students on both sides enthusiastically getting into character. All those involved were very engaged, prompting Mr. St-Amant to step in and remind students to "avoid making snide remarks at the end of arguments."

After some deliberation, the jury decided to convict the defendant on the possession charge but acquit him on pointing a firearm at another person. "Even though I wasn't actually on trial, it was still pretty nerve-racking," commented Antoine, adding that he wasn't surprised by the jury's decision. Sentencing will take place in class at a later date.

Students debriefed with Mr. St-Amant afterward, going over their strategies and hearing suggestions for improving their arguments. The class was eager for a redo and was excited to hear that they would be attending a real trial next month.
Back
80 chemin Moulton Hill, Sherbrooke, QC J1M 1Z8 CANADA
Phone: 1.819.566.0227 | Toll-free: 1.877.570.7542  | Email Us