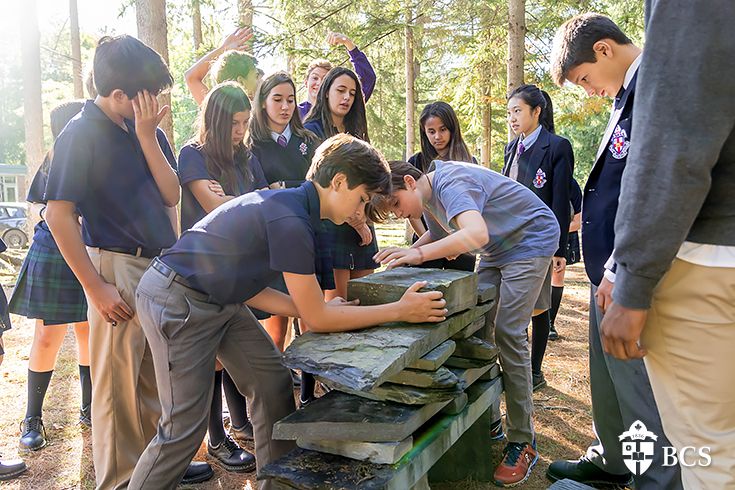 Sep. 19, 2019 | The 2019-20 BCS No. 2 Cadet Corps assembled for their first cadets meeting this afternoon.
The cadets program is a longstanding tradition at BCS dating all the way back to 1861. The program teaches students valuable lessons about leadership, teamwork, and self-discipline. Students received their first introduction to the cadets program during Orientation Camp earlier this month with today marking an introduction to the regular cadet meetings that take place every Thursday afternoon. The group began the afternoon with marching practice, followed by a service project led by Mrs. Cook. Together students moved and rebuilt one of the inuksuit in front of McNaughton House. These stone landmarks were originally made in 1998 in Nagano, Japan and were beginning to become overgrown. The students worked as a team and delegated leadership roles to keep track of the order in which the stones were stacked.

Overseen by Major Nichols, over the next months, students will meet every Thursday afternoon to learn outdoor survival skills, practise archery, ride mountain bikes, and participate in a continually evolving program of activities. They will also start preparing for the Annual Review of the BCS No. 2 Cadet Corps held on May 22, 2020.