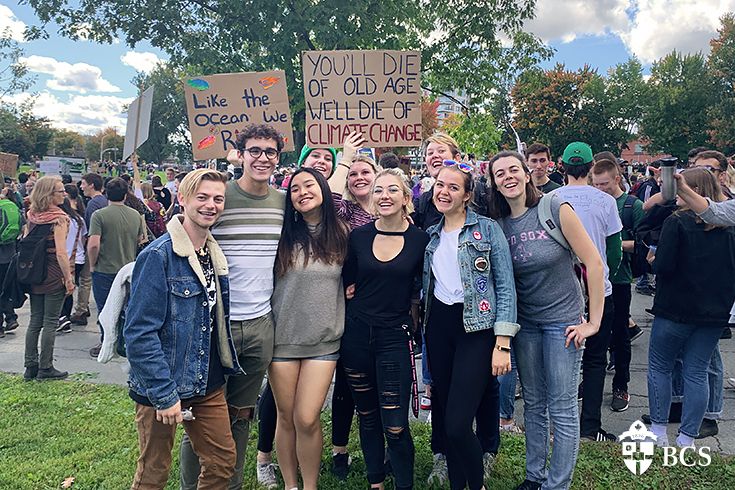 Sep. 27, 2019 | A group of BCS students joined the Sherbrooke community in today's global climate strike
Members of the BCS Green Group joined an estimated 9000-strong protest in the streets of Sherbrooke today. Together they walked 7.5 kilometres from Université de Sherbrooke to the Sherbrooke City Hall to demonstrate the importance of taking action on the current climate crisis. Many of our prefects took part in today's march, including Cala in Form VII who founded the BCS Green Group at the beginning of this year. "We want to promote environmentally sustainable practices at BCS and if we don't take action today, we won't have a tomorrow," she expressed emphatically when asked about her goal with the Green Group. Other members echoed her concern, with fellow Form VII student Violetta clarifying that BCS' participation in this climate strike was entirely student-led. "No one's going to fight this fight for us," she added.

Mrs. Vanier was among the teachers who joined the group's march this afternoon. She explained before their departure, "As an adult teaching today's youth, my job is to support their voice and take a stand as an educator to show the importance of this message." Ms. Laberee also noted that as Canada nears a federal election, supporting the voice of those that can't yet vote is an important responsibility.