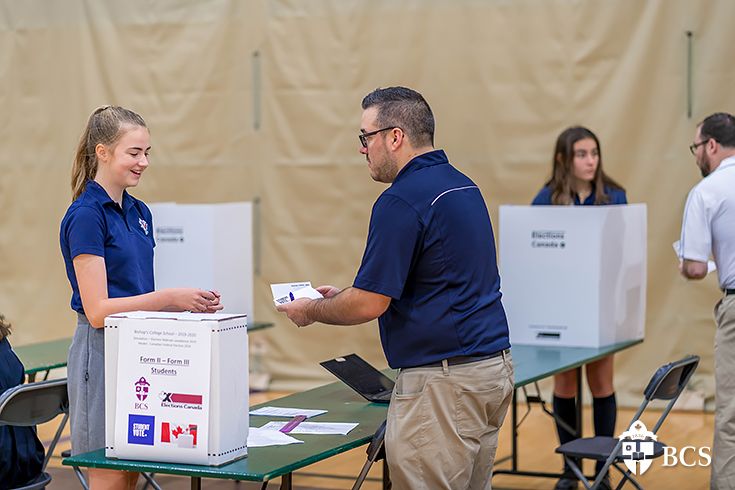 Oct. 17, 2019 | The H. Weir Davis Memorial Gymnasium was transformed into a polling station today as our student community took part in a mock election.
During the provincial elections last year, M. Courchesne had his Form V students cast fake ballots to allow students from all backgrounds to experience the process of an election in Canada. In anticipation of the federal election next Monday, he and Mr. Turcotte partnered with CIVIX Canada to organize a school-wide mock election today. M. Courchesne introduced the project last Friday in Chapel, outlining the process for those who may not be familiar with Canada's political system. He has been following up over the past week by sending emails detailing each party's platform and providing students with resources to make an educated vote. The process today was remarkably similar to the real thing, from the identification card requirement to the use of real Elections Canada voting stations. True to form, the ballots listed candidates from BCS' own federal electoral district.
While the process is a purely educational experience, the results will be shared with the community and CIVIX Canada next week. Along with the other 950 participating schools in Canada representing 1.1 million students, we will be able to compare BCS' political leanings with the rest of the country.
Back
80 chemin Moulton Hill, Sherbrooke, QC J1M 1Z8 CANADA
Phone: 1.819.566.0227 | Toll-free: 1.877.570.7542  | Email Us