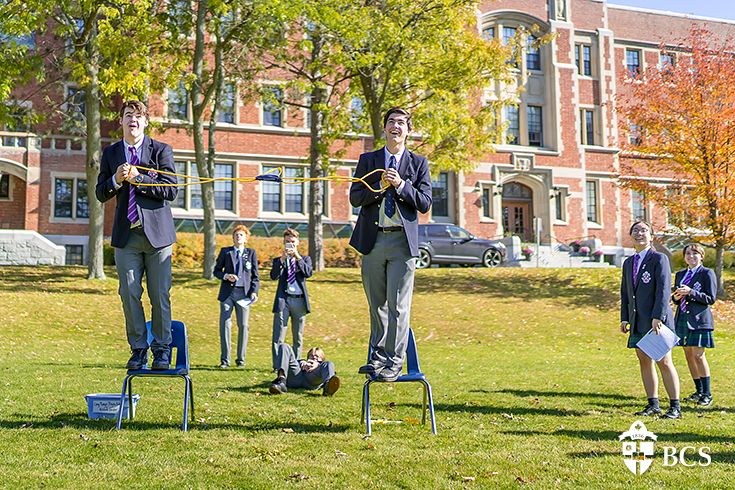 Oct. 24, 2019 | Ms. Rowell's Form VI Physics class took to Centre Field to study the effect of air resistance on flight time using water balloons.
As part of their unit on Kinematics, students in Form VI Physics were treated to a game of Angry Birds in real life to study the notions of projectile motion and how certain variables influence the range of a projectile. In small groups, students used slingshots to launch water balloons as far as they could, measuring the difference in ascent and descent time and observing the air resistance. "We calculated the launch speed of the water balloons from our data which was upwards of 75 to 90 kilometres per hour" Ms. Rowell shared. "We also introduced the idea of range of projectile motion by shooting some balloons as far as we could at the end of the initial experiment." Having put theory into practice, our students will be better equipped to understand and explain these notions—something that will come in handy on their next Physics exam!
Back
80 chemin Moulton Hill, Sherbrooke, QC J1M 1Z8 CANADA
Phone: 1.819.566.0227 | Toll-free: 1.877.570.7542  | Email Us