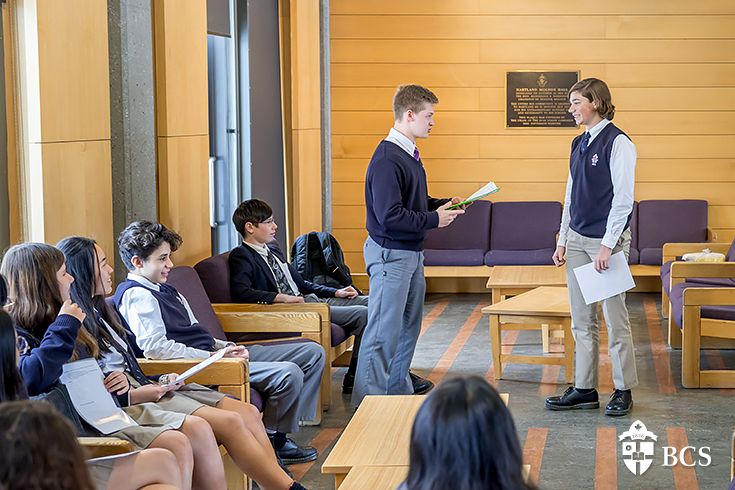 Jan 8, 2020 | With Shakespearean eloquence and a mischievous smile, our Form IV students hurled insults at each other this morning.
Our English Language Arts class was practising elocution and creative writing while putting the language of Shakespeare to use in the Student Centre today. The students are currently reading Romeo and Juliet and learning about life in the Elizabethan era through discussions, adaptations, and live readings of the play. To demonstrate the importance of theatrical delivery and have some fun with early English 'Shakespearisms', Mr. Key held an insult competition, pitting students against each other as they crafted their most playfully derisive taunts. Performing in pairs, one student might call their classmate a "gorbellied earth-vexing clack-dish" only to have the offence returned as their opponent likened them to a "churlish crook-pated barnacle." After each round of lively insolence, spectators would vote for their favourite insult and the winner would move on to the next round. Throughout the event, Mr. Key played music from The Good, the Bad and the Ugly and Game of Thrones to raise the stakes of the mock conflict. Lucas added his own music to the mix by playing the Mexican national anthem to celebrate Leonardo's win against Mathieu as he claimed the title of heckling champion. "You saw that the winner of each round was often the one who was most emphatic in their delivery of the insult," Mr. Key pointed out to the students after the activity. "In theatre and public speaking, the way we express our thoughts is often just as important as the words we use to express them." He closed by encouraging them to consider getting involved in this year's QAIS Public Speaking Competition, which BCS was involved in hosting last year.
As the class begins reading the third act later this week, they plan to perform a scene from the play together at some point during the term, either on stage or as an edited film. We look forward to seeing how they apply their creativity next!
Back
80 chemin Moulton Hill, Sherbrooke, QC J1M 1Z8 CANADA
Phone: 1.819.566.0227 | Toll-free: 1.877.570.7542  | Email Us