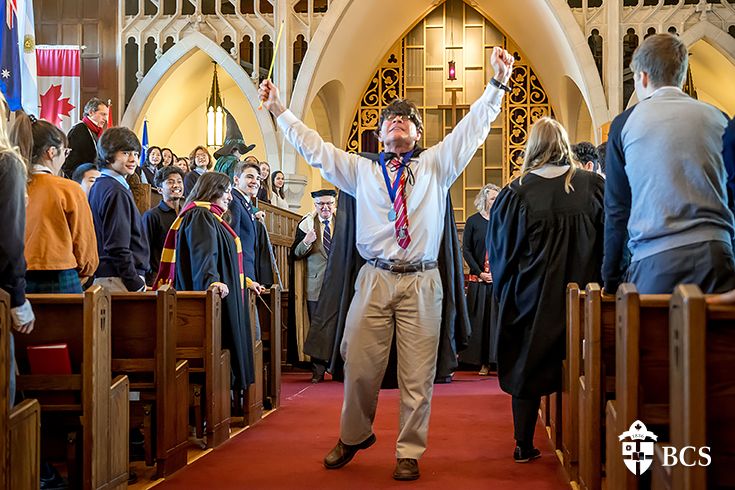 Jan. 30, 2020 | In a surprise chapel performance this morning, our staff put on a magical display to celebrate the beginning of this year's Carnival!
Inspired by an enchanting performance by our Carnival Committee last week, faculty and staff performed their own Potter-inspired skit to get students excited for next week's Carnival festivities. Despite only having a few meetings to plan, write, and practise the skit, the 16-strong cast transformed our regular chapel routines into a production that had Harry Potter fans and neophytes alike chuckling in their pews. Each character was expertly cast, featuring Mr. Tessier as Severus Snape, Mr. Obermeir as Draco Malfoy, Mr. Hunt as Gilderoy Lockhart, Mrs. Carey as Minerva McGonagall, and many more who zealously committed to their characters. A few of the performers were avid fans of the series, with Mme Lanoue, Mme Desroches, and Ms. Lamb vying for the title of biggest Potter-nerd. Despite being unfamiliar with the story, Mr. Nadeau showcased his signature energy in his portrayal of a raspy but excited Harry Potter.