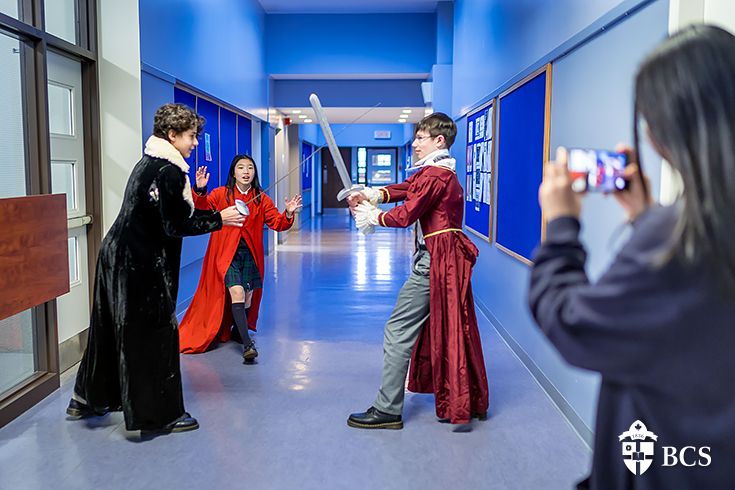 Through a new lens

Feb. 18, 2020 | Our students were acting out in School House this afternoon as they performed a recontextualized interpretation of Romeo and Juliet.
What began as a battle of words has escalated into an all-out duel as Mr. Key's students performed for the camera this afternoon. On the third floor of School House, Tybalt and Mercutio could be seen battling with swords and dressed in costumes from our theatre department. Building on their thorough study of one of Shakespeare's most popular plays, the Form IV English Language Arts class was tasked with filming a scene from Romeo and Juliet while changing its context. Some groups have decided to set their scene at BCS, others are working on a time-travelling documentary. Amine, Mulan, Jean-Sébastien, and Laura enthusiastically acted out their scene for our cameras, though they noted that they were still developing their story's twist. "It's really fun. I've never done a video project like this before," Mulan shared about the group's filming experience. Jean-Sébastien added that he enjoyed the opportunity to learn about literature in such an interactive way.

The class will have two more filming sessions to wrap up this portion of the project and we're excited to see how the students will take up this creative challenge when they present their finished films on Monday!
Back
80 chemin Moulton Hill, Sherbrooke, QC J1M 1Z8 CANADA
Phone: 1.819.566.0227 | Toll-free: 1.877.570.7542  | Email Us