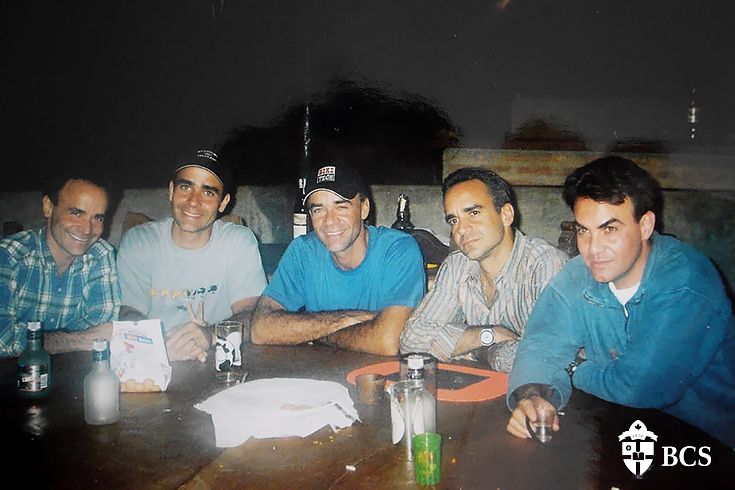 Apr. 10, 2020 | In honour of National Siblings Day, we caught up with Nelson Morales-Bello, BCS'86, about his brothers and their BCS experience.
National Siblings Day was originally founded by Claudia Evart in the late '90s after she lost both of her siblings. She chose April 10 because it was the birthday of her late sister, Lisette. According to Claudia, Siblings Day is meant to "develop, nurture, and sustain the special bond between siblings."

This year, we're sharing the story of the Morales-Bello brothers—David, BCS'75, Ivan, BCS'77, Milton, BCS'78, Igor, BCS'79, and Nelson—who attended BCS during the '70s and '80s. The brothers forged many close bonds with their fellow classmates, developing relationships akin to those of siblings. Their friendships are still thriving to this day and they've kept in close contact with the school. Milton's twin sons David and Carlos even attended BCS, graduating in 2015!

The brothers have all gone on to have successful careers. David became a plastic surgeon, Ivan built his own construction company, Milton became a successful entrepreneur, Igor an attorney, and Nelson a Foreign Exchange advisor. "We are all successful in our own right," Nelson expressed. "I believe that BCS and the foundation that the school gave us played a key role in our development. BCS made me grow up, be independent at a young age and also taught me to follow rules and be disciplined. These are all traits that I truly believe make your adult life easier and [possibly] allow for a more successful professional life."

Head over to our Facebook page to get to know some of the siblings that currently make up the great BCS family—including some gems from the Grahams, Prices, and Rodecks! Don't forget to reach out to your siblings (whether real or forged) to let them know how much you appreciate them.
Back
80 chemin Moulton Hill, Sherbrooke, QC J1M 1Z8 CANADA
Phone: 1.819.566.0227 | Toll-free: 1.877.570.7542  | Email Us