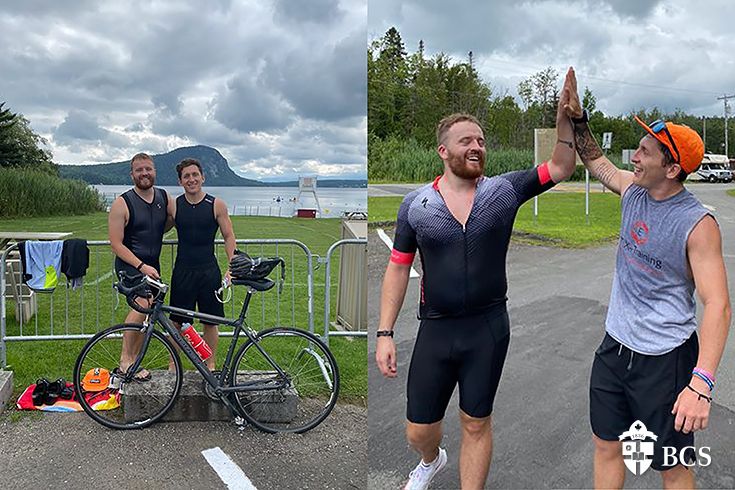 August 12, 2020 | After four weeks of training, James Andrews, BCS'11, and Josh Bray, BCS'15, achieved their goal of completing a triathlon Monday morning.
Although the challenge was initially born out of a place of friendly rivalry, James and Josh quickly realized that it was an opportunity to highlight two organizations that matter to them. James chose to fundraise for the Cancer Research Society of Montreal while Josh raised funds for the Canadian Mental Health Association. "James and I initially got into it because of the competition," Josh expressed. "But fundraising for our causes quickly became our main focus and drive." In the month leading up to the triathlon they raised close to $2,500 collectively (and counting!)

The event which took place in Baldwin Mills, Quebec Monday morning saw the pair swimming 750 metres in Lake Lyster, cycling for 20 kilometres along Chemin de Barnston, and running five kilometres up and down Mont Pinacle. "It was a day not soon forgotten," Josh said about the event. "Thank you to all our supporters!"

Josh and James are still collecting donations for their chosen causes. Show your support by clicking the links above and read more about their journey in the latest edition of The Record.
Back
80 chemin Moulton Hill, Sherbrooke, QC J1M 1Z8 CANADA
Phone: 1.819.566.0227 | Toll-free: 1.877.570.7542  | Email Us