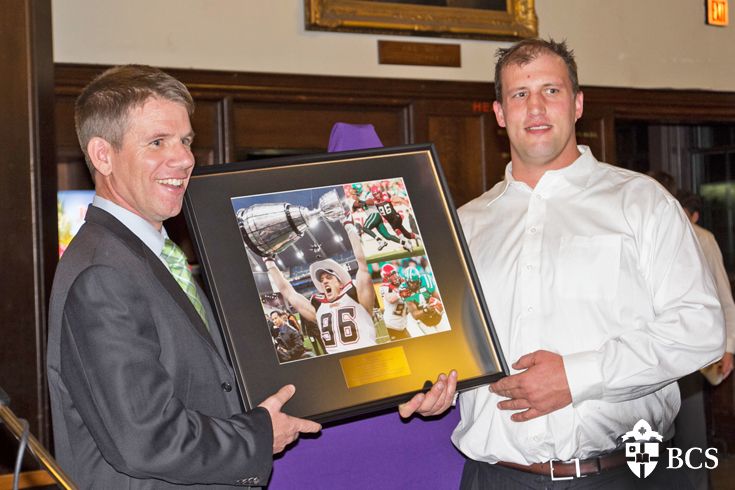 Special guests at the Sports Banquet

Nov. 10, 2015 | Football player and BCS alum Miguel Robede was added to the BCS "Athletics Wall of Fame" during last night's Sport Banquet.
BCS students had the pleasure of meeting alumni Miguel Robede'99 and Véronique Bernard'00, along with their two beautiful children. Miguel, who won the Grey Cup while playing for the Calgary Stampeders from 2006 to 2010, was presented with a framed picture of his sports accomplishments that will be placed alongside other alumni on the BCS "Athletics Wall of Fame." He also took the opportunity to remind students of the importance of discipline and organization in all areas of their lives in order to be successful. Miguel pointed out that he learned these skills as a teenager while at BCS, and that they have helped him throughout his whole life, contributing to his current success.
Back
80 chemin Moulton Hill, Sherbrooke, QC J1M 1Z8 CANADA
Phone: 1.819.566.0227 | Toll-free: 1.877.570.7542  | Email Us